watch 01:42
'The Gifted' Profile: Mutants
Do you like this video? 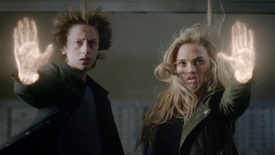 Mutants (also known as Homo Superior) are individuals born with what is commonly referred to as the X-Gene, which grants them superhuman abilities and/or unusual physical characteristics.

Mutants have generally been an oppressed and feared minority, varying somewhat by country. They were among the many groups oppressed under the apartheid government in South Africa.[1]

Four years prior to the series, anti-mutant sentiment drastically increased in the United States due to a disastrous incident at a mutant rights march, when an energy blast went off and killed thousands of innocent civilians (both humans and mutants). The disaster became known as the "July 15th" incident after the date on which it occurred, often referred to as "7/15" for short (paralleling how the September 11th, 2001 attacks are commonly referred to as "9/11"). The incident sparked of widespread anti-mutant riots, and retaliatory pro-mutant riots in reaction to those. For a time, there was chaos in the streets, with mutants fighting humans and super-powered mutants fighting each other (good mutants trying to restrain the bad ones, but the crossfire still causing massive property damage).

Due to the 7/15 incident new, harsh anti-mutant laws were rapidly introduced. Shortly afterwards, both the X-Men and the Brotherhood disappeared under mysterious circumstances. Operating under the amended Patriot Act, Sentinel Services was given the constitutional power to arrest any mutant they saw as a potential threat, regardless of prior civil liberties. Humans generally saw this anti-mutant crackdown as restoring order.

Right before the X-Men disappeared, one of their last acts was to set up the Mutant Underground, an "Underground Railroad" for mutants, consisting of a network of safehouses in independent cells across the country. The X-Men selected Thunderbird to lead the Mutant Underground, which he built up along with Polaris, gradually joined by other mutants such as Eclipse and Sage.

Mutants are distinguished from humans by the presence of the X-Gene, which grants mutants extraordinary superhuman powers and abilities. The X-Gene has also been known to cause physical changes varying between mutants. They can have wildly varying biologies depending on the nature of their mutation. While some may show no changes to their appearance, others have exhibited such changes to their skin or eyes. In Clarice Fong's case, better known as Blink, her eyes are a bright shade of green.

Mutation is caused by the X-Gene in the mutants' DNA. For most people, mutations normally manifest themselves during puberty, often as a result of a stressful or traumatic event. This is the case for Andy Strucker, although, some mutants possess an active X-Gene from birth. Like all genetic traits, the X-Gene can remain dormant and skip generations causing human parents to produce mutant children. According to Thunderbird, while most mutant first access their abilities through strong emotions such as fear, pain, or anger, this is an unreliable means to controlling them. The difficulty that so many mutants face when attempting to control their abilities is that they fail to tap into something positive.

The social status of mutants varies from one country to the next based on local laws, and on the more subtle level of discrimination can vary from one community to the next in the same country. Generally, they are treated as a feared and ostracized fringe minority in most countries. Mutants were badly oppressed in South Africa during the apartheid era (along with other human groups). The United States used to at least officially extend mutants full rights as citizens, but in the anti-mutant crackdown after the 7/15 incident it has become quite restrictive, to the point that Mexico is considered to have more loose mutant laws.

In the United States, mutants have very often been disenfranchised in a variety of ways. Basic employment discrimination is a major factor faced by many mutants. Most mutants' powers activate when they reach puberty, leading many to become runaways and street children (frequently thrown out and disowned by their own families). Before long, mutant runaways often turn to theft and crime to survive, or are easily victimized themselves. On a day-to-day level, it is also often difficult for mutants to obtain health care from hospitals: given that they have "the ultimate pre-existing condition", health insurance companies can easily refuse to cover them (mutants' diverse biology often makes it expensive to treat them, but insurance companies don't want to pay out for them even when it isn't).

Due to mutants often facing job discrimination, they often take whatever employment they can get, often low-paying or dangerous jobs most humans don't want to do. A disproportionately high number have historically served in the United States military since the second half of the 20th century. The US military does not officially discriminate against mutant recruits, instead happy to have the manpower to devote to various foreign wars such as in Afghanistan (where, for example, Thunderbird served several tours of duty).

There is a somewhat significant divide among mutants between those who can physically pass for human, and those whose physical mutations are so drastic that they cannot. Mutants who cannot pass for human can't hide their nature, making them overt targets for discrimination. Even if not directly targeted for attacks, mutants who can't pass for human usually can't find work, and thus it is fairly common for them to become homeless runaways that steal to survive. Blink and Shatter are prime examples of this, while Thunderbird, Sage, and Dreamer can easily pass for human. These differences are on a spectrum, and thus some mutants who look nearly human often slightly alter their appearance to pass: case in point, Polaris naturally has bright green hair, but dyes it black so as not to draw suspicion in public. While a lot of mutants can pass as human, some do display slight mutative differences, i.e. Eclipse appears human, but if he bleeds, his blood gives off a blinding, white-hot glow.

Reactions to the mutant phenomenon by religious groups have been mixed (somewhat paralleling religious reactions to slavery in the antebellum period). Some deride mutants as unnatural, but conversely, many religious groups embrace the principle that they are dedicated to helping all people, human or mutant. Thus for the Atlanta cell of the Mutant Underground, many of their safe-houses are sympathetic churches across the South. According to Senator Montez's aides, national polls indicate that 30% of Evangelical Christians consider God's message to apply to humans only, not mutants. However, a plurality of the electorate still feel that humans and mutants should be treated equally (a "plurality" meaning the largest group but less than 50%, with the difference apparently made up by the undecided). [3]

Retrieved from "https://thegifted.fandom.com/wiki/Mutant?oldid=21267"
Community content is available under CC-BY-SA unless otherwise noted.