With the Inner Circle and the Purifiers on the rise, and the nation more divided than ever, the dream of the X-Men is on the verge of failure. In attempts to revive the Mutant Underground, Evangeline proposes a country-wide meeting. Meanwhile, Lauren and Andy continue to disagree in their dreams and the Frost Sisters attempt to intervene. Caitlin makes the risky suggestion of connecting with a family member for vital intel, and Lorna tries to secretly investigate Reeva's plans for the Inner Circle.[1] 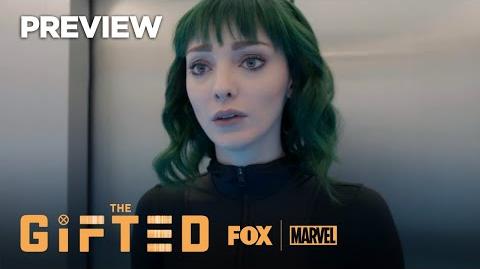 Preview Think About What They Could Do Season 2 Ep. 12 THE GIFTED

Retrieved from "https://thegifted.fandom.com/wiki/Home?oldid=21096"
Community content is available under CC-BY-SA unless otherwise noted.