The Hellfire Club was a mutant terrorist organization. Like the Mutant Underground, it tries to fight against anti-mutant actions, however, they believe that humans and mutants will never be able to co-exist and favor using excessive force and aggressive actions.

The precise date the Hellfire Club started is unknown, however, they are shown to have been in operation as far back as the 1950's and were founded by the Brotherhood. The club is lead by a council known as the Inner Circle. Two of their members, Andreas and Andrea Von Strucker were mutant siblings known as Fenris (the wolf). Together they were responsible for a series of terrorist attacks around the world, in places such as London and Rio. Eventually the clubs activities brought them into conflict with the X-Men and they apparently "disappeared" while running from them.

Currently, the organization is attempting to revive itself and have sent several agents to infiltrate positions of political power. Two of their agents, Phoebe and Sophie Frost were captured while on their respective assignments and their sister Esme only narrowly escaped. Eventually Esme, who had tricked the Mutant Underground into helping her, was able to free her sisters from captivity, along with a handful of other mutants. She has since convinced Polaris to leave the Mutant Underground and join the Club, as well as Andy Strucker, Sage, Fade and Bulk as they were convinced that the Underground wouldn't do what was necessary to ensure their survival.

After recruiting new agents from the Mutant Underground, members of the Inner Circle felt that the Frost sisters were reckless in their actions. Reeva Payge revealed the Frosts were acting under her orders, gathering powerful Mutants capable of initiating the Mutant homeland project. Now they had a mutant as powerful as Polaris, as well as a descendant of the Von Strucker twins, in the form of Andy. However, William and several others felt that the Mutant Homeland project was too dangerous to attempt and rejected the idea, which left Reeva with only one option. She proceeded to use her power to disable them long enough for the Frost sisters to shoot and kill the other members. Reeva rebuilt the Inner Circle with the Mutant’s recruited from the Mutant Underground, including the Frosts, Lorna and Andy.

Throughout the Series[edit | edit source]

In "3 X 1", Esme, Sophie and Phoebe recount the Trask escape with William, an associate of theirs. The alarms were going off. People were coming. They went one way while the Mutant Underground went another. They took the Struckers without so much as a thank you, the girls add. And in the 2 days since that, they've had no interaction with the Underground, who felt used. So Esme, Phoebe and Sophie wanted to give them some space since their parting moment was heated, to say the least. William is displeased with the mess they left at the Trask lab. But as Esme points out, they barely got out of their alive. William explains that he was recruited to rebuild the Hellfire Club with them. So activities like his, such as taking down a hedge fund are essential, while their transgressions will only make things more difficult, like their killing of a dozen Sentinel Services agents. They made a lot of noise, yet the Hound program is stronger than ever. So they need to act quickly and they'll need the Underground's help.

The Frost Sisters reconvene with William, who is irate. He has been taking calls for hours. The inner circle is angry with their stunt. The sisters wonder if the inner circle had a better idea. Because if they did, they could've shared it instead of hiding behind their screens and chessboard. Esme, Sophie and Phoebe risked a lot of lives as they were responsible for tipping off Sentinel Services to the Fairburn station. The Frost sisters defend their actions by reasoning that someone times you have to sacrifice a few pawns if you want to win. The Underground needed to understand what they are all up against. It would seem that their stunt went exactly as planned as the Underground has agreed to the alliance.

In "X-roads", Lorna and Esme arrive at the Mutant Way Station in Nashville, Tennessee, where the Mutant Underground has regrouped following the destruction of Headquarters. Lorna interrupts Marcos' speech to say that there's nothing noble about struggle. And sacrifice is just a pretty name for losing. The Mutant Underground is dying, but that world that they've always talked about where they don't have to hide and live in fear, she wants to build that for them, but they need people to do so. The people they've come for know who they are, which includes Fade, Bulk, and Sage, who apologizes for switching allegiance. But at the end of the day this is just about survival for Sage. Last to join them is Andy, who feels as if it's his birthright. 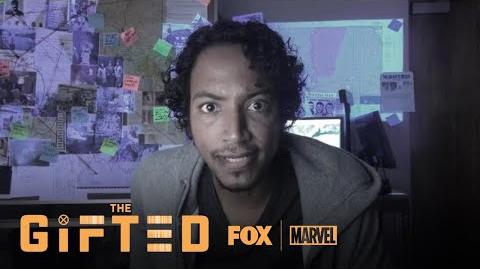 Retrieved from "https://thegifted.fandom.com/wiki/Hellfire_Club?oldid=21693"
Community content is available under CC-BY-SA unless otherwise noted.